Today, I found a picture who's feeling I relate to: 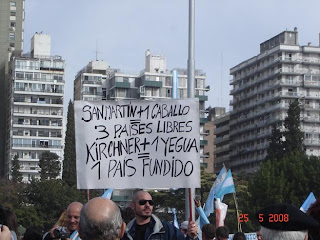 Congratulations tot he one that came up with the phrase and made the sign (I found the picture here), I hope they do not mind that I make my own version:

"San Martín with 1 horse freed 3 nations,
a penguin and his mare destroyed Argentina"


Posted by Mariano S. Cosentino at 2:02 PM No comments:

Today, I was planing to tell you about my first day in México, but when I arrived to the hotel I got a very sad news.

My Girlfriend called to let me know that our dog "Bioy" has died. 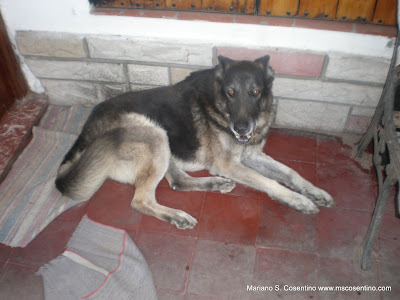 "I say our dog because what we love, we considere it our property" so goes the song by Alberto Cortes, and it's the true.

It was Romina's dog, she got it as a puppy, named after her favorite writer and raised and care for him over the year, saving his live many times along the way, she introduced us to each other a few years ago. It might have been her dog, but I loved as my own, and while many times he was a tricky SOB I loved him (and I love him) very much.

We knew that he did not have much rope left, after all he was about 14 years old, which as they say  translates to over a hundred "dog years", but we selfishly hopped that the would live a couple more years, that he would be able to see our house fixed, and that he would be able to meet the brother or sister that we were planning to acquire  And, we never voiced, but I think we were both hopping that one day he would meet our own children.

I can believe that he really is dead, he cheated death so many times that it's hard to understand that he is no longer with us.

We was showing his age, his mouth hair was almost white and  he was moving slowly, still, every once in a while, he would summon all his strength and ability to squiz his body through the fence and get through the window. How was he able to pass his body through  the small holes of the fence ? That's a secret he took with him.

I remember how happy he was after I cleaned up the area under the grill and prepared it for him to sleep. I was not sure if he would really like it but he loved it right away.

He has a crazy dog, eating only when we were around  if no one was close by he would have to be really hungry to eat, and many of his "Doggie" bites ended up feeding the birds of the neighborhood that came to enjoy the free lunch.

I meet him old, but he was really beautiful  he was a bit of an "artist", barely walking one instant and at the next he was climbing everywhere to get same place he was not supposed to. He respected and obeyed Romina (most of the time, anyway) but he had little care for what I might have to say (decidedly he did not see me as the Alpha-male of the house :-) ).

As you can see, this hit me hard, not only have I lost my dog, he died while I'm thousands of kilometers away, I can not say "goodbye" to him, and I can not hug and comfort the woman I love in such a difficult moment.

But I know he loved me, and I love him very much.

Goodbye Bioy, I would have like to get to know you even better and for a few more years, thanks for all the love you gave us and for so many great memories.